Got all my figs this weekend and they are beautiful as usual! Thank you!

Dark Sword Miniatures built its reputation as a top tier boutique miniature company the old fashioned way – we earned it. Over the past 18 years and counting, we have paid our dues and taken a measured approach to assembling our outstanding team and then knuckling down to do the meaningful work needed to actually produce and ship some of the best miniatures in the world, day in and day out. We have delivered the goods since our first release way back in 2003 and will continue to do so as long as our customers keep coming back for more. I have seen many companies come and go in the time since I started Dark Sword. All the while, Dark Sword just goes about our business by focusing our efforts on the great care and attention to detail that our hand-picked team members employ when creating our miniatures. From the source artwork to sculpting, mold making, production, packaging and painted studio models, Dark Sword strives to offer something unique and special to discerning miniature collectors and gamers around the world.

Over the years, Dark Sword has also been recognized with the following industry awards: 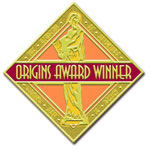 It should be noted that 2008 was the last year Dark Sword threw their hat in the ring to even be considered a nominee for the Origins Awards. These awards are exactly like the Academy Awards or Golden Globes but for gaming companies. You have to throw your hat in the ring first, send in samples to a judging committee who then determine if your line even makes the cut to be one of the five “Nominee Finalists” for Best Miniature Line of the Year. It is indeed an honor to make it through the process to the final cut and then be nominated of course (just like a movie being nominated for Best Picture of the Year). But after 2008, the Origins Awards lost their appeal to me and I stopped submitting our ranges for consideration.